Why we need to change the record.

Throughout the last seven months, on an almost weekly basis, I’ve been giving seminars and group sessions for CEOs and executives from all types of industries and sectors, organised by various associations, industry groups, and what Andrew Carnegie would have described as “CEO Brain Trusts” – those loose-knit collections of peers within which untold insights reside.

One of the first charts I shared during those first calls back in March, was the image below. 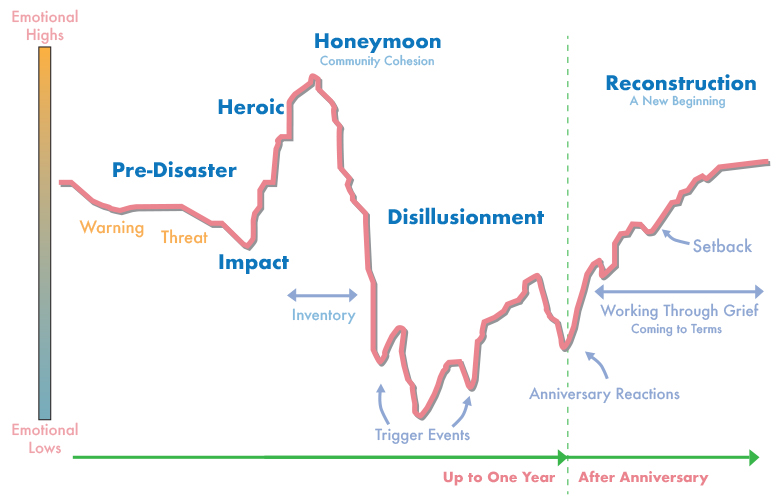 It’s called “Phases of Disaster”, and it’s from a 1992 paper by researchers Zunin and Myers. Their comprehensive analysis of the psycho-social impact of major events, ranging from tsunamis to paramilitary attacks to mining disasters, identified several consistent phases, all of which have played out this year.

The heroic response we saw in March as the first lockdown came in. The “honeymoon” period of April and May, when we were all running on adrenaline and just getting stuff done. The drop in energy most people felt as we moved through late May into June, and on through the anxious reopening in Summer.

Energy and stress inside most businesses waxed and waned as restrictions went and returned. These have been the trigger events at a population level, but many of us have had our own besides. And most recently, the Sisyphus paradigm kicked in with the second wave lockdown most of us find ourselves in today.

And throughout all of this, leaders have defaulted to a fairly consistent message: things are tough for all of us, and we have to adapt/change/innovate/scale back (delete as appropriate), but we’ve achieved some extraordinary things in adversity and if we work together, we and our teams and our customers, will all get through this.

That message has had its day. It’s time to change the record.

This week’s announcement by Pfeizer of its latest vaccine results may yet unravel as the data is scrutinised and peer reviewed, but a cohort of alternatives is not far behind. And as we look ahead to February, March and April, the smart money is settling on those three months for a major bounce-back.

There is a rapidly brightening light at the end of this tunnel, and we need to get ready to burst out of the blocks after Christmas because, by the end of that first calendar quarter, odds are that everywhere will be back up, and demand will be rebounding with a vengeance.

Now is the time to start future-fitting your business, taking the positives from the pandemic and building them in going forwards. Now is the time to embed the responsiveness, resilience and agility your people have shown, into the culture permanently and to get yourselves a step ahead of the curve.

We may all be in different industries and sectors, but from all the talks and sessions I’ve done over recent months, for groups, associations and collectives, I can tell you this: many of our challenges and opportunities, and most of the questions we need to answer, are essentially the same. Carnegie knew this, as did Rockefeller, which is why they both relentlessly used their peer networks from across the business world to share, learn and challenge each other.

And that’s why, from the start of January, I’ll be running fortnightly “brain-trust” breakfast calls for the CEOs in my community to help us all explode back out of the blocks. There’s no fee to register, no requirement to be at every call, the only cost is that you listen openly, share honestly, and respect the confidentiality of your colleagues.

If you think you’re eligible and haven’t received an invitation, just drop me a reply and I’ll add you to the mailing list for dates, Zoom links and output summaries.

The future is bright, but only if we make it so, and the easiest way to do that, is to do it together.