The four ways to motivate people. 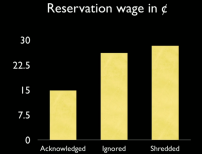 The more organisations I help, the more I’ve come to realise that creating a strategy is the easy bit. Getting everyone to work together, shedding their preconceptions, contributing all of their skills and expertise, and wanting, really wanting, to deliver it - that’s the hard bit.

Sure, having a really good strategy is important. You need to push people to be really ambitious about what they want to achieve, challenge self-limiting beliefs, crystallise what things could look like, blend “everything’s possible” with “not everything’s profitable”, and hopefully emerge from the chrysalis with a sharp focus on a few things that will make a huge difference. But that still only gets you to the starting blocks. Because it takes people. Motivated, engaged, highly capable people, to get you from there to the finish line.

If the people aren’t up for it, it doesn’t matter how good the strategy is.

And that’s where so many organisations go so badly wrong. They follow the easy route; the conventional wisdom. Big mistake.

So how do you engage and motivate people? Not with money, that’s for sure. Money can secure you the talent you need, but it doesn’t motivate that talent to perform. Scores of research experiments over the years have shown that beyond any doubt. But they’ve also identified four factors that really do make a difference: purpose, autonomy, personal growth and recognition.

Purpose: Becoming the world’s biggest widget maker or making industry-leading returns for shareholders might be great for board members with big egos and LTIPs, but it leaves employees stone cold. Aiming to do something really meaningful, like improving people’s lives, fosters a deep and lasting commitment. From tribal times, we’ve evolved to want to be part of something bigger than ourselves – your strategy needs to provide that, if you want people to give you their all.

Autonomy: Would you like to unlock amazing creativity and foster a level of ownership that money can’t buy?. Then help your people decide what they need to achieve, then give them permission to solve their own problems in order to achieve it. Don’t legislate to stop poor performance. Fire your poor performers and give good people the room to shine.

Personal Growth: I’ve had three amazing bosses in my career. Each of them saw something in me that I’d never seen, and pushed and challenged me, to be more than I’d ever thought I could be. Those periods of extraordinary personal growth live with me now, and there’s nothing I wouldn’t do for those people if they asked. What could you achieve if all of your team felt that way?

Recognition: Dan Ariely’s researchers gave three groups of volunteers a sheet of paper with random letters on, and for a small sum of money, asked them to highlight where the same letter appeared consecutively. Each time they completed the task, they were offered slightly less to do it again. For the first group the assessor looked at the page, said "aha", and put the page on a pile. For the second, he didn't look at the page, but just put it on the pile. For the third group, without looking at it, he put the page straight into a shredder, right there in front of them and, as per the other groups, he asked them to do it again for slightly less money.

The first group, who were acknowledged, continued until they earned around half the initial amount. The third group, who had their work destroyed before their eyes, stopped very quickly. So what of the “ignored” group? In fact, they behaved almost identically to the group that had their work shredded. The study, whose results are in the image at the top of this article, showed that even a modest degree of verbal appreciation got people to volunteer to work for almost half the pay of those that were ignored.

Conventional “strategy wisdom” might lead you to believe that shareholder return is the ultimate measure, that defined processes make employees effective, that appraisals should be based on performance rather than potential, and that recognition should be about financial reward. Nothing could be further from the truth.

BOTTOM LINE: Nine out of ten people who read this will file it under “quite interesting”. One in ten will change what they do, and will step-change their performance as a result. What could motivate you to become a part of that 10%?