Four ways to prepare for an industry sea-change. 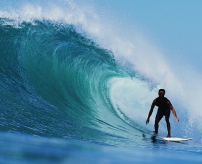 At some point, most industries undergo some form of transformational shift. Sometimes this happens over a period of time, like the growth of food sales in the pub industry, giving most of the players time to adapt and survive. Sometimes, like the changes currently happening in the music and publishing industry, the shift is much more rapid and gives the fastest-movers the opportunity to create, and corner, a whole new market, whilst others are left to consolidate, chase or die.

So here’s the question: when the next big wave hits your industry, will you see it coming?

One thing’s for sure: listening to your current customers won’t help. Your business is defined in their mind, by the things you currently do for them, and that’s a very tight box for them to try and think outside of. Ask your customers what they’ll want in three to five years, and they will generally ask for more of what they’re already getting, but with lower prices and better quality. An apocryphal Henry Ford quote illustrates the point \"If I had asked my customers what they wanted, they would have told me a faster horse.\"

On the whole, customers are much better at identifying flaws, comparing quality, feeding back initial impressions, and testing out prototypes, than they are at predicting their own, let alone others’, future behaviour.

So what can you do to prepare yourself? How do you ensure you ride the next big wave, rather than being swamped by it? Here are four big ideas to help:

Whilst your current, satisfied customers might not tip you off to a seismic shift on the way, the defectors might. Many businesses would dismiss the loss of a handful of low-value customers as simply value seekers moving on, or misguided adopters of a flash-in-the-pan alternative. But could these be the pebbles that start the avalanche? Do you know how many customers redirected some of their spend away from you last month? Do you know where it went, and why? Have they moved to a mainstream competitor, or is it something more radical? If so, you need to know.

Many great innovations don’t come from big companies; more often than not they are developed by independent entrepreneurs and inspired geeks. That’s why Proctor and Gamble expect 50% of their innovation to come from outside of their company in the future. And it’s why your competitor intelligence should focus at least as much time on watching and listening to the entrepreneurs and start-ups on the edges of the market, as it does on the mainstream players.

Innovation is the bi-product of failure. Whether their initial ideas come from inside or outside of the organisation, the companies that generate the most consistent streams of innovation are the ones whose bins are replete with failed experiments. The trick is to fail fast, prototyping, trialling and involving customers early in the process. A learning and forgiving culture, organisational headroom and individual empowerment all play an enormous role in creating an environment that is capable of producing game-changing innovation. How easy is it for a middle-ranking individual in your organisation to develop and test a new idea? If you don’t know, I suggest you try it.

Napster was a geeky irritant to music publishers, who saw it as a threat to their revenue model. Downloading would cannibalise their retail sales and margins, so rather than harnessing the technology, they fought it. When computer-maker Apple leveraged the technology, it transformed the music industry, leaving the publishers on the wrong end of some formidable negotiations just to get access to the new paradigm. When the opportunity is there, if you don’t cannibalise your sales, someone else will do it for you.

In contrast, since Apple created the portable MP3 player market, they have consistently innovated, repeatedly cannibalising their own hardware sales to prevent anyone else getting in. Gillette successfully followed the same strategy in razors for years, creating one of the world’s most dominant consumer product brands.

Most mature businesses focus on listening to their best customers, watching their biggest competitors, streamlining their resources behind the key deliverables, and protecting revenues in their core products. It’s a great way to deliver incremental progress in a static market. But it’s also a great way to come unstuck when the markets shifts rapidly and radically. The good news is that if you’re all geared up to respond to the next big wave, the chances are, it may well be you that makes it happen.