How to thrive under pressure. 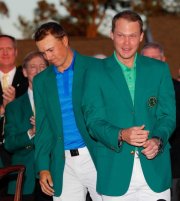 Contrast Jordan Spieth’s collapse at the Masters last month with Danny Willett who, under the exact same pressure, kept his head and his focus and went on to win.

On any given day, some people just seem to thrive under pressure, while others really struggle, and it’s exactly the same in business.

Right now in your organisation there will be people who are struggling under the pressure. They might not be hitting consecutive balls into the water in front of millions of viewers, but the signs are there if you look for them. Signs like:

So why do some people react in these ways while others don’t?

From what I’ve seen, the difference between the “thrivers” and the “strugglers” isn’t due to some innate quality, it’s a combination of mindset and learned skill, and what’s really striking is how quickly, with the right coaching, people in that situation can turn things around. Not everyone, for sure, but the majority of those I’ve worked with.

One technique I coach with in businesses is RAPTA: “Rapidly Assess, Prioritise, and Take Action”. RAPTA involves quickly breaking down all of the big things that need to be achieved into a series of decisions around what can slip back, what could be done by others, and what needs to be done now, by you. You then ruthlessly prioritise the most critical elements, and look for the fastest, most efficient ways they can be done, building to an immediate plan to get things moving.

The process helps strugglers “clear the fog” and gives them clarity on what they need to do. Once they’ve got that, it’s like a starting gun just fired: the feelings they describe of focus and of energy, and the pace at which they start moving things forwards can have a real, tangible impact, not just on their own performance, but on the people around them as well.

Just like elite athletes, most professionals who engage with a really good coach see an immediate improvement. But in business the benefit goes way beyond that - leaders who’ve been well coached become better coaches themselves, able to cascade techniques that have worked for them to their own teams.

So here’s the question for today: how good is your organisation at spotting and coaching people who are struggling under pressure?

Just think what your organisation could achieve if everyone was able to use their every day pressures as a vehicle to create: complete clarity on what they need to do, absolute focus to get on and do it, and an infectious enthusiasm to raise the game of everyone around them.

Now think about how you could bring that about.