Four letters that hold you back. 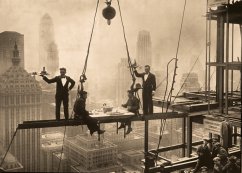 We don’t talk about having fear at work. We’re adults, so it’s not an issue for us.

Except when it is.

I’ll give you two recent examples.

In a planning workshop, there was a difference of opinion on how a situation should be resolved. Two key players saw it very differently, but after some discussion, an approach was agreed by all. Two weeks later, one of them changed the decision without consultation. Why?

In a sales workshop, the team reviewed progress since their training sessions. Several of them had made big strides but a couple had found it really difficult. The issues, they explained, had been pre-existing commitments, the need to do more research, uncertainty around price. All of these were justifiable reasons, but they weren’t the real reason.

Fear of conflict, fear of rejection, fear of failure and losing face, fear of change and the unknown, fear of upsetting the people we care about; all of these are very real, and their effect can be as corrosive as it is subconscious. If you don’t recognise any of these in yourself, you’re either a rare individual or you’re really not looking.

So how do we counter this pervasive predisposition? Here are the four steps to take:

Step one: recognise fear as a factor. If you’re finding plenty of good reasons to explain a course of action you know isn’t ideal, stop. Challenge yourself to at least consider what you would ideally do.

Step two: feel the fear and do it anyway. If you know it’s the right thing to do, but you’re slipping into “avoidance strategies”, make the commitment to yourself that, at some point, you will take the plunge.

Step three: make yourself accountable. Tell someone you trust about the decision you’ve made, and commit to them a timeframe. It doesn’t need to be anyone near the situation. Simply sharing it is enough.

Step four: plan your reward. You’re about to do something uncomfortable, something you’d rather avoid, and you’re going to do it anyway because it’s the right thing to do. And that’s the critical bit: the reward is for doing the right thing, not for the outcome, whatever it is.

Bottom Line: As a species we’re far better at rationalising emotional decisions that we are at making rational ones, and self-preservation is a powerful emotional driver. Just make sure you notice when it kicks in.